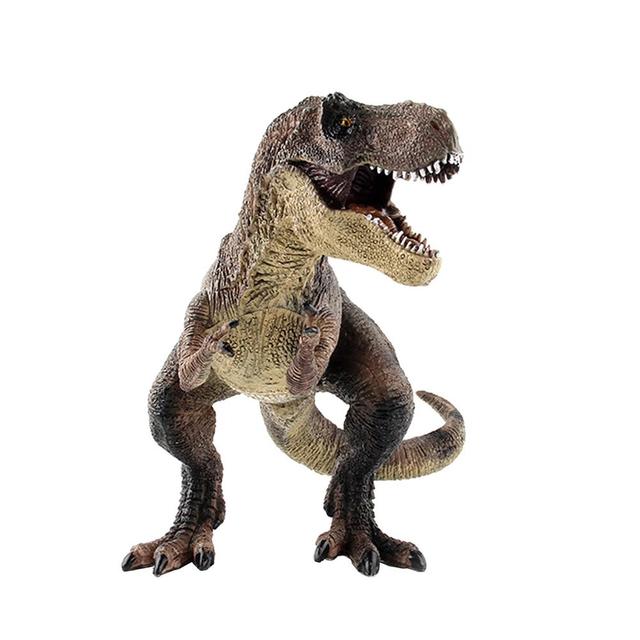 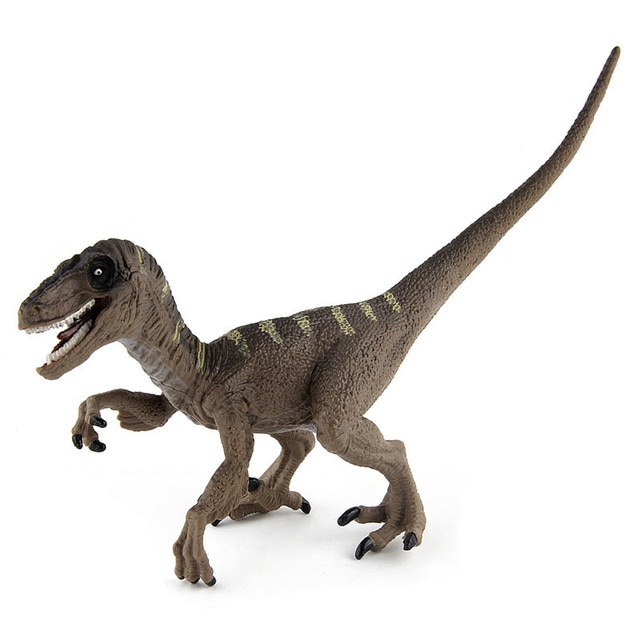 Learn more about our dinosaur figures

Children are fascinated by dinosaurs. These animals with the appearance of reptiles or birds disappeared several million years ago. To please your little boy or girl, why not give them a miniature dinosaur figurine?

Carnivorous dinosaurs, including large predators, are the stars of dinosaur figurine collections. It is impossible to ignore the T-Rex figurine, the Tyrannosaurus Rex, the central dino of the films "Jurassic Park" and Jurassic World.

The bipedal predators have left many fossils. The Spinosaurus, whose name means "spiny lizard" is a specimen known for its size: up to 18 meters long! It was a carnivore and fish-eater. The Ceratosaurus may have been 6 meters long, but it became extinct because of the fearsome Allosaurus with red and blue scales.

Among our dinosaur figurines, you will find the Carnosaurus, with its movable jaw to observe its dentition, the Acrocanthosaurus with its dorsal spines, or the Cryolophosaurus known for its recurved crest. Dimetrodon impresses with its enormous dorsal sail, Pantaceratops has the most voluminous skull, and Kaprosuchus, called "boar crocodile", is a fast quadruped thanks to its large rear legs. The Therizinosaurus is surprising with its feathered body and its scythe-like front claws. It ate small mammals and vegetables. With its long snout, the Baryonyx with its rough crest and its orange tail could breathe underwater.

It is impossible not to mention the Velociraptor figurine: this agile and highly clever carnivorous dinosaur, with a huge claw on each of its feet, was a great runner who attacked in groups. Finally, the most famous of the pterosaurs - the flying reptiles, is the Pteranodon could measure 9 meters in wingspan.

The prey of predatory dinosaurs ranged from tiny animals to large ones. Herbivorous dinosaurs had defense mechanisms, such as the Stegosaurus's dorsal bone plates, to protect themselves from the jaws of the T-Rex.
To liven up your child's playtime, consider herbivorous figures. The most popular herbivorous dinosaur is certainly the Brachiosaurus. With its 10 meter long neck, it could reach branches as high as a 4 floors building. It must have weighed up to 30 tons! Also check out the Triceratops, a dinosaur with a bony collar, three horns and a parrot-like snout. Amargasaurus was a little herbivorous dino that lived in bands. The Iguanodon with the horned beak could use its forelegs to move or only its rear legs.

An educational and fun game

The dinosaur figurines are entertaining toys. These children's games help to apprehend the natural evolution of different species, from the extinction of the dinosaurs to prehistory (how did we go from the mammoth to the elephant?).
The work of reconstruction of paleontologists, starting from a dinosaur skeleton, a Diplodocus fossil or footprints discovered during excavations will captivate kids. In this way, the figurine is an educational toy, ideal to learn while having fun, and to make young people love history and science. By comparing today's lizards to dinos, birds to feathered dinosaurs, and rhinos to Triceratops, anatomy becomes a game!
Young child collectors will enjoy these realistic, articulated Cretaceous miniatures. These educational sets are ideal for outdoor fun or for collecting.

The world of dinosaurs is adapted in educational toys for children, perfect for an introduction to the world of science. Dinosaur Universe has decided to offer to all children the possibility to discover and blossom by playing with quality dolls allowing them to manipulate super realistic puppets at any age.

We offer in our online store figurines of all sizes from the simple toy with a palm-sized design to large figurines that can reach the size of a dinosaur egg! You will find all types of dino, from marine reptiles to terrestrial dinosaurs and even ferocious vertebras with sharp teeth as seen in movies such as Jurassic Park for example. Children who love flying dinosaurs will also be delighted and will find their happiness on our online store. Indeed, we also offer a whole range of these flying creatures like the gigantic Pterodactyl which was the master of the sky at the time of the Cretaceous. Our collection of figurines also covers the more peaceful, intelligent and immense dinnosaurs that lived on all continents of the planet as is the case of some herbivorous that can reach the size of a building of our time. Your child will have fun while discovering the names of all the dinosaurs that walked our Earth before the mass extinction that once hit our planet more than 66 million years ago, leaving only giant fossils and skeletons for our geologists to discover all over the world.

Collect all species of cold-blooded reptiles from your home! Whether you like bipedals with long tails or multi-foot horns, we have an endless selection of ancient and extinct animals that will delight kids and adults alike. Discover new species that you would never have imagined existed. did you know that some species have feathers and not scales? In fact, many dinosaurs were very similar to the birds of our time, but with dimensions that were almost ten times larger than modern birds.

Adults passionate about fossil hunting and dinosaurs in general will also be perfectly served with our collection of fearsome predators and meat eaters in the form of plastic or resin figurines for even more realistic effect.

Create your own Jurassic Park with the dino puppets

Thanks to their real aspect, the dino figures will immerse you in the universe of these giant reptiles. With POPA or SIDJ dino figures, your child will be able to play while learning about prehistory and dinosaur history. Have hours of family fun with the T-Rex dinosaur or the Triceratops dino.

Dinosaur toys are great for sharpening a child's mind and imagination.

Tell them about the history of the different species of reptilians. Your child will love and want to create original adventures in the heart of nature with their dino figures. The limitless imagination of children will give new life to these animals that disappeared millions of years ago. But beware! Dinosaurs are real predators. Even the biggest carnivorous dinosaurs, like the T-Rex, sometimes hunt the smallest ones. Your child will have to tame his dinosaurs.
Escape to an unknown land, into the world of the carnivorous Herrerasaurs and Psittacosaurs. Discover the dinosaurs, relive and modify the history of these animals to your liking by making the two dinosaurs confront each other for hours of intense family games.
With the Dinosaur Universe collection, your child can adopt dinosaurs and open his own "Jurassic Park". The dino toys will allow him to become a true master in dinosaur breeding. Dinosaur toys will appeal to even the youngest children who can play and have fun with these animals. After a few hours of play, they can become real apprentices in the study of dinos.
For the more courageous, we offer special dinosaur kits. With these dinosaur kits, your child will be able to put himself in the shoes of Professor Alan Grant from "Jurassic Park" and build his own prehistoric reptile.

This mysterious animal that fascinates the world.

When there were no humans and no animals as we know them today, dinosaurs, the world's most famous reptiles, were already populating our planet Earth. In France, the United States or China, dinosaurs were everywhere on Earth and largely dominated the other species of animals of that era.
Dinosaurs lived more than 200 million years ago before disappearing completely from the surface of the Earth 66 million years ago. The disappearance of the dinosaurs led to the end of the geological period called "Cretaceous" by scientists.
The only witness to the sad extinction of these mythical animals is in Mexico. The discovery of the Chicxulub crater bears witness to the 10 km diameter meteorite that crashed into the Earth and caused the death of sauropods, theropods, marine dinosaurs and feathered species.
However, these incredible animals of impressive size continue to live on through the ages. For scientists as well as for us, dinos are part of the history of the Earth. And not just in a symbolic way. For experts who study dinosaurs, the bird species we see today are all descended from ancient dinosaurs. Incredible, isn't it?
Many dinosaur fossils and dinosaur skeletons have been found in different countries. In July 2019, a new giant femur was discovered in Charente at the paleontological site of Angeac-Charente. Right next door to you. Thanks to their various discoveries, scientists can, today, get a better idea of what dinosaurs were like. Some species of dinosaurs were formidable fighters and could use their tail, several meters long, as a weapon destroying everything in its path.
However, if the discovery of large reptiles was then reserved to paleontological scientists, dinosaur fossils came out of the museum and found a particular interest in France and in the whole world thanks to the release of the movie "Jurassic Park" in 1993. This science fiction movie, entirely dedicated to the world of dinosaurs, was one of the biggest successes of the time. It was the first time that we could see a dino so close.
Thanks to "Jurassic Park", dinosaurs have conquered the hearts of millions of children and adults. "Jurassic Park: The Lost World" and "Jurassic Park 3" follow the first "Jurassic Park" movie. In 2015, Colin Treverrow modernized "Jurassic Park" and directed the film: "Jurassic World". It is a new planetary success for the vertebrates.
Through the films "Jurassic Park" and "Jurassic World", we discovered these extraordinary animals born millions of years ago. Under the sea, on land or in the air, dinos fascinate us for their size and beauty. And yet, scientists still have so much to learn about these creatures.

It's your turn to play!

Even though they became extinct millions of years ago, these beasts are still respected by all. Delving into the history of the wildlife saursthrough games is an excellent way to develop a child's curiosity and desire to learn more. Dino games are a real source of historical and scientific awakening for your budding reptile breeder. Become a professional problem solver with our dinosaur puzzles that will impress and educate your children about this fascinating world!